No Deaths | No Cardiac Perforations | No Atrioesophageal Fistulas​

Greater Freedom from AF and AF Burden Reduction in Patients with LSPAF with Hybrid Convergent vs Endocardial Ablation Alone, and Sustained Through 18 Months (7-day Holter)1,2

Greater Freedom from Atrial Arrhythmia with and/or without Anti-arrhythmic Drugs* in LSPAF with Hybrid Convergent vs Endocardial Ablation Alone, and Sustained Through 18 months (7-day Holter)1,2 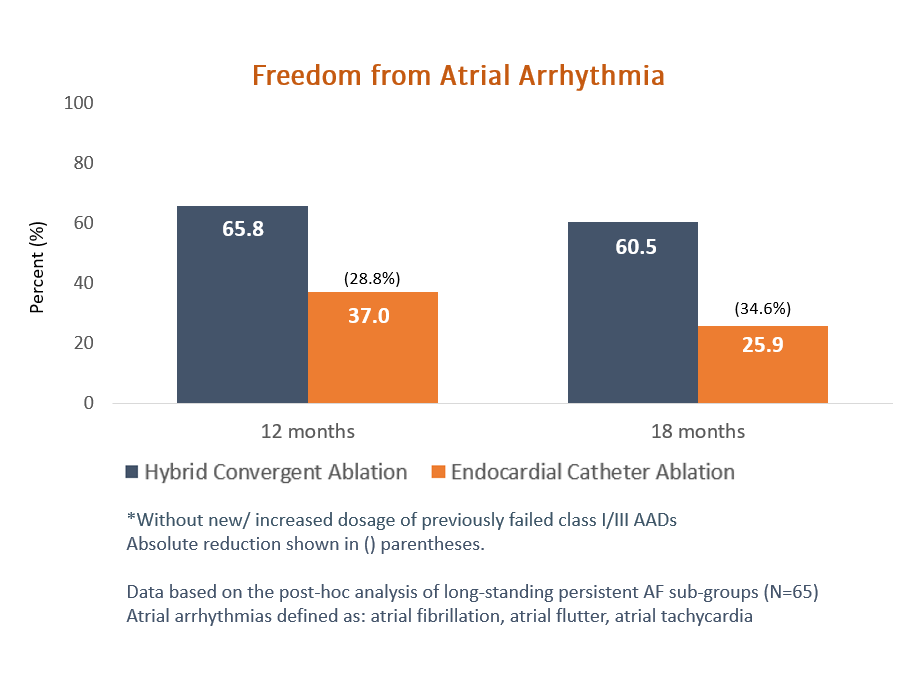 Results: The Hybrid Convergent procedure was associated with improved AF-Free survival on and off antiarrhythmic drugs (AADs) versus endocatheter ablation alone at 12 months and at 30.5±13.3 months of follow-up. 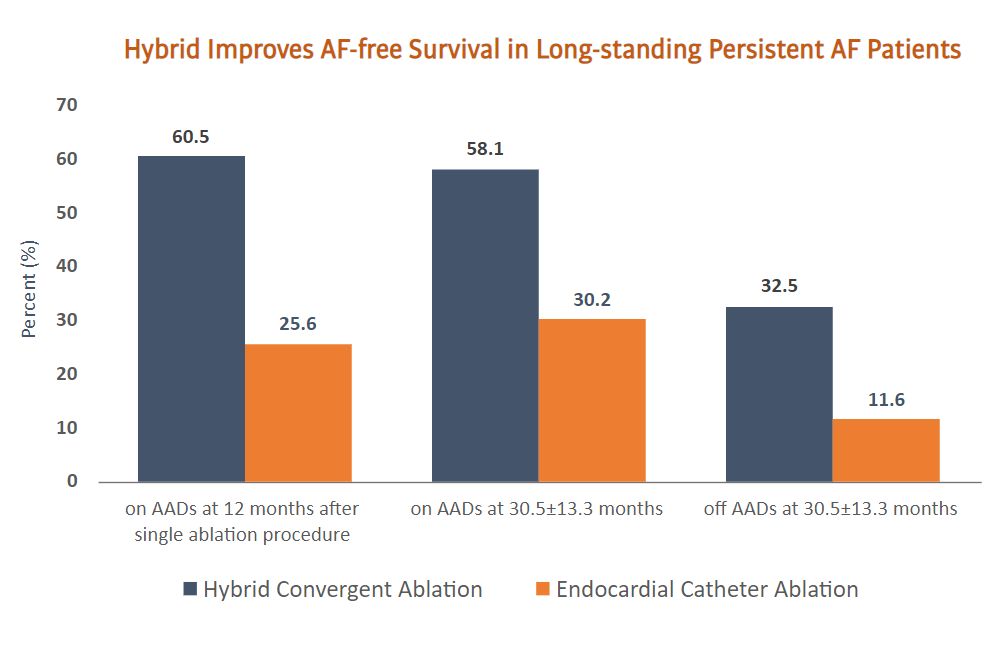 Sample Size: N=226 who underwent Hybrid Convergent procedure with endocardial cryothermy ablation between Nov 2011 and May 2018. 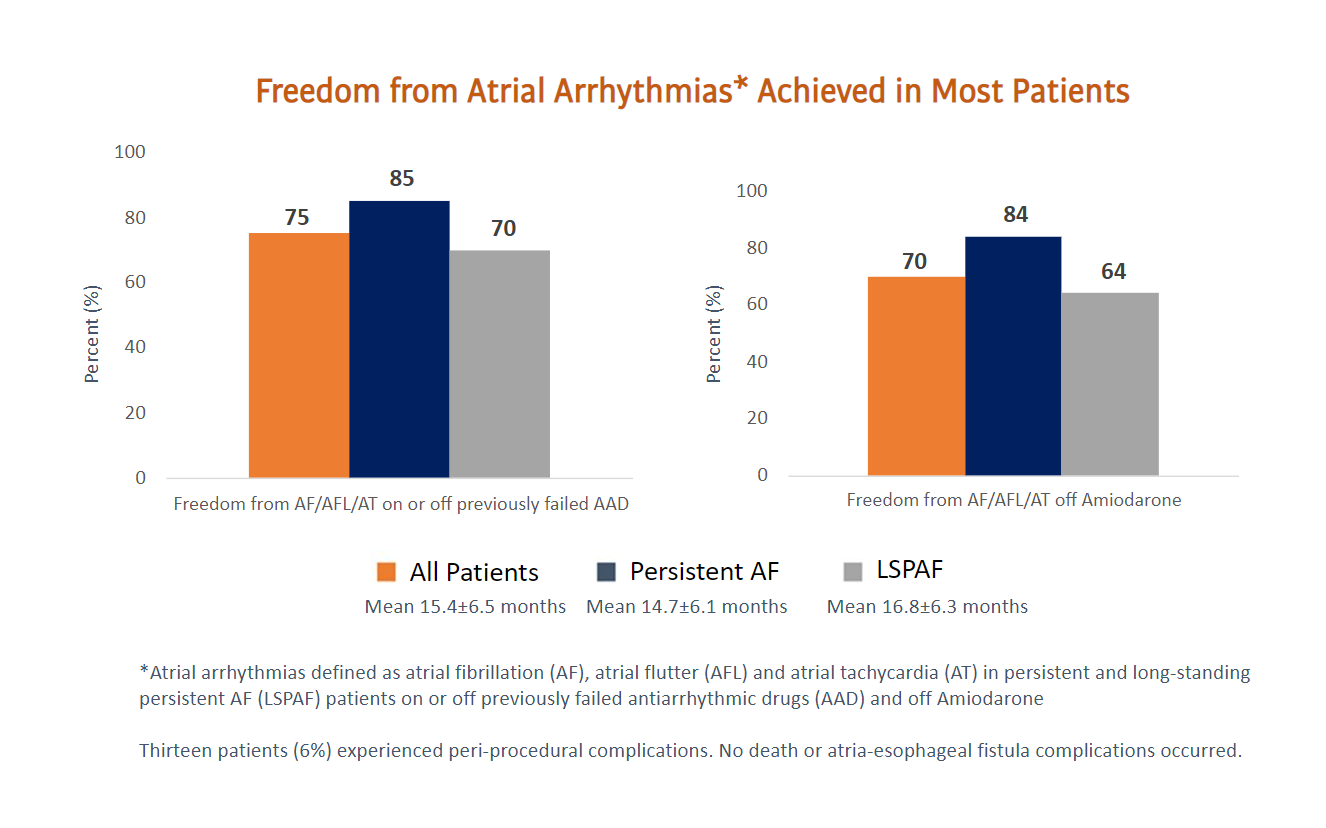 This retrospective analysis evaluated 31 patients with persistent atrial fibrillation (AF) who underwent the Hybrid Convergent procedure at a single institution between Oct 2013 and Mar 2017.

Freedom from Atrial Arrhythmia Recurrence with or without Anti-arrhythmic Drugs

A total of 16.1% of patients in this cohort had pre-existing hypertrophic cardiomyopathy. These patients are known to have higher recurrence rates and need for antiarrhythmic drugs (AADs) for longer periods of time.

EPi-Sense® Guided Coagulation System U.S. Indications: The EPi-Sense Guided Coagulation System is intended for the treatment of symptomatic long-standing persistent atrial fibrillation (continuous atrial fibrillation greater than 12 months duration) when augmented in a hybrid procedure with an endocardial catheter listed in the instructions for use, in patients (1) who are refractory or intolerant to at least one Class I and/or III antiarrhythmic drug (AAD); and (2) in whom the expected benefit from rhythm control outweighs the potential known risks associated with a hybrid procedure such as delayed post-procedure inflammatory pericardial effusions. Contraindications include patients with Barrett’s Esophagitis, left atrial thrombus, a systemic infection, active endocarditis, or a localized infection at the surgical site at the time of surgery. Adverse Events: Reported adverse events associated with epicardial ablation procedure may include, but are not limited to, the following: pericardial effusion/cardiac tamponade, pericarditis, excessive bleeding, phrenic nerve injury, stroke/TIA/neurologic complication. Please review the Instructions for Use for a complete listing of contraindications, warnings, precautions and potential adverse events located at the following AtriCure web address: https://www.AtriCure.com/EPi-Sense-Coagulation-Device. Warnings: Physicians should consider post-operative anti-inflammatory medication to decrease the potential for post-operative pericarditis. and/or delayed post-procedure inflammatory pericardial effusions. Physicians should consider post-procedural imaging (i.e. 1-3 weeks post-procedure) for detection of post-procedure inflammatory pericardial effusions. Precautions: Precautionary measures should be taken prior to considering treatment of patients: (1) Deemed to be high risk and who may not tolerate a potential delayed post-procedure inflammatory pericardial effusion. (2) Who may not be compliant with needed follow-ups to identify potential safety risks. To ensure patients undergoing treatment with the EPi-Sense device are well informed, the benefits, potential risks and procedural outcomes associated with the EPi-Sense Hybrid Convergent procedure should be discussed with the patient. Physicians should document accordingly in the medical record. Qualified operators are physicians authorized by their institution to perform surgical sub-xyphoid pericardial access. The coagulation devices should be used by physicians trained in the techniques of minimally invasive endoscopic surgical procedures and in the specific approach to be used. Operators should undergo training on the use of EPi-Sense device before performing the procedure. Safety and effectiveness of concomitant left atrial appendage closure was not evaluated in the CONVERGE study. Follow-up should be conducted at approximately 30 days postprocedure to monitor for signs of delayed onset pericarditis or pericardial effusion. Rx Only. This material is intended to provide objective information about the use of AtriCure's Technology, including where and how the device can be used within the continuum of care. The enclosed publication includes information regarding patients with persistent or long-standing persistent atrial fibrillation treated with the EPi-sense technology in a hybrid procedure. This material is being provided to demonstrate use of the EPi-Sense system in the treatment of long-standing atrial fibrillation and its clinical outcomes. This publication was chosen for this purpose because the study summarized herein utilized a trial design similar to that used in the CONVERGE IDE study which supported FDA approval of the EPi-Sense System for the indication stated above.